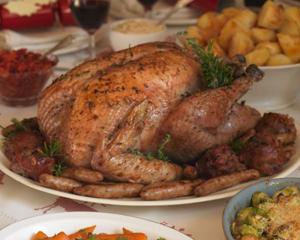 I cooked a turkey yesterday. For the first time. In fact, I can’t recall when I even ate it last. D has been saying that he misses it for so many years now, and I was at home, so I thought, what better than to spend a whole day cooking ?

It truly is a whole day affair, and people say to get the family involved, blah blah blah, but to be honest, in my house there’s only one cook at a time in the kitchen, so don’t attempt unless you seriously have the entire day.

I have had years of roasting a chicken once a week, so in my mind, it was just a bigger version, right ? Noooo. Turkeys are bred to be lean, and because they are so big, you have to ensure that it doesn’t dry out while roasting.

Essentially, you need to steam the bird until it’s cooked, and then let it brown in the oven at the end.

I really dislike handling raw meat, in particular, poultry, and here they vacuum wrap a lot of their poultry, so that when you cut the plastic open, all these raw juices flow out – it’s really quite horrid. Washing the bird normally gets rid of this and I have to admit I struggled to handle a 5kg bird and it took a LOT of paper towels to pat it dry.

I had a bit of a giggle when I was trying to wash the bird – every cavity I washed there seemed to be something stuffed in there – giblets, the neck, a gravy packet, some string – the bird that gives more !

After waiting for 5 hours for it to cook, the turkey was finally ready – all nicely browned, roast potatoes looked deliciously crispy and it was 9pm so D and I were absolutely ravenous.

I don’t know what I was expecting but I found the meat, although nice and juicy and tender, was lovely with lots of gravy and cranberry sauce, but without, seemed quite flavourless. Guess that’s just turkey.

Would I do it again ? Not in a hurry…it really just is a big b*stard chicken. I can’t believe households do this once or even twice a year !  But this year, I did it.  One less thing to cook in my life … so, Merry Christmas !!

A girl slowly eating her way around Singapore and farther afield when she's lucky. END_OF_DOCUMENT_TOKEN_TO_BE_REPLACED
This entry was posted on Tuesday, December 22nd, 2009 at 1:20 am and tagged with Christmas, turkey and posted in Recipes, Special occassions. You can follow any responses to this entry through the RSS 2.0 feed.
« A tipple at Tippling Club
A wine whine »