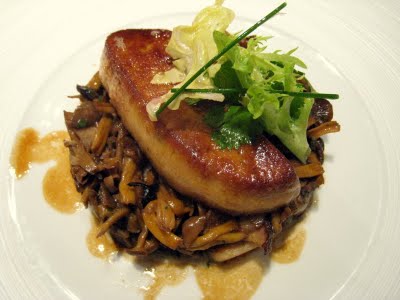 D surprised me last night by saying he was going to take me to Jaan par André, a restaurant that we’ve wanted to try for ages.  Hearing rumours that chef André Chiang was going to leave to set up his own restaurant, we thought we’d catch him while still there, and are we glad we did !

The restaurant has a cracker view of the harbour and the place was nicely buzzing when we walked in.  The set up is a bit weird, there’s no real greeting area, so we kind of walked straight into the dining room.  There were three maitre d’s who seem to be the only ones to seat guests (we were noticed by a few of the serving staff, which I thought was strange, despite them not doing anything to acknowledge us standing there waiting).

Once seated we were served the most ridiculous “bread sticks” which were about half the thickness of an uncooked strand of angel hair spaghetti and this was served with an eggplant dip.  The sticks were so fragile that there was no hope of picking up any of the dip with them.  I was hungry (and apparently have no manners) so picked up a dollop with the bread knife and found it smooth and creamy.

An amuse bouche was served – raw sweet prawn served on frozen sangria which was very refreshing, but not sure it really worked.

Then we got to the real stuff.

Entrees was a difficult decision between scallops saint jacques or perigord foie gras but once again foie gras won the day.  Served three ways – pan seared, terrine, and the clear winner of the three, a foie gras jelly, which had the consistency of chawanmushi, with fresh truffles.  Absolute heaven in a cup!

For mains, I had the Bresse chicken which was served with scallops and foie gras and morel mushrooms, which I’ve only ever seen on River Cottage on TV.  Light and creamy, I the chicken had a delicate flavour and a texture that was much smoother than I think chicken should be.  But it was moist and tender and didn’t need tons of sauce so you could really taste the chicken.

We didn’t have space for dessert, but were served petit fours – a raspberry sorbet infused with earl grey tea and dipped in white chocolate (which I don’t usually like), a light and crispy macaroon, a madeline and dark chocolate with orange crisps and POP ROCKS.  Took me a while to figure out what the noise was until I realised with glee that the chef had managed to include them in the delicious chocolate.  Really took me back years and ended the evening with a big grin on my face.

With the chef leaving at the end of the month, we’re going back again for more before it all ends…