Tucked away in the back streets of Bukit Timah is Ristorante Da Valentino, which my friend C who took us there described as “charming”.  And boy was she right. Small, clearly family run and loved, you are warmly welcomed to your table amongst a nice buzzy ambiance.  The waiter tells you the specials of the day – that night, a lot of produce flown in from various parts of Italy, all of which sounded so good we ended up ordering five antipasto entrees between the three of us.

Never, even when we were in Italy, have we tasted produce like this.  The food was simply prepared, and when the produce tastes this good, you don’t need to dress it up.  First came anchovies  – lightly floured and fried, on a bed of salad, simply dressed with a squeeze of lemon.  I love love love small fish anyway, and anchovies are one of my favourites, so this was easily going to be a winner.  The next two were tomatoes from Southern Italy – they were small like cherry tomatoes, and dressed in olive oil and a few shavings of basil – and the flavour in them was almost ridiculous.  THIS is what tomatoes are meant to taste like – intensely sweet and savoury at the same time.  These perfectly accompanied fresh buffalo mozarella.  And again, neither D nor I have had the pleasure of sampling buffalo mozarella like this.  It was almost like it had just been molded – a big white, voluminous cloud of cheese dressed with olive oil, which the waiter cut at our table, and you could see the milky goodness ooze out of it from each cut.  OH MY GOD.  Heaven.  We also had the tormino cheese wrapped in proscuitto and pan-fried – the cheese was a little too “tangy” for my liking – I kept thinking of goat’s cheese, which I really do not like.  Oh, and how could I forget the ham ?  Homemade on premises, served thinly shaved with a warm prosecco sauce.  Delish.

Freshly baked ciabatta was served along with all of this, crisp and sliced thinly, so you could dig out the anchovy pesto from the small ramekin that they gave each person.

We were so full after the antipasta that we ended up just ordering pasta for our mains.  I had the linguine aglio olio with tartufo which, even as a garlic lover, was a little overgarlicky for me – there was about one bulb of pan-fried garlic pieces throughout the linguine and hardly any tartufo.  C and D had the porcini ravioli with tartufo and perfumed with truffle oil.  I think that was the winner, but D was so enamoured by it he only remembered to offer me some after he’s eaten most of it and I was soooo full by then.

We couldn’t even think of dessert, but Valentinos also has the most astounding array of amarones that I’ve seen, ranging from $100 – $2000.  C had taken us there especially for amarone, but the waiter recommended a Valpolicella from Dal Forno, Romano.  D absolutely loved it.

In fact, D loved the whole meal so much, it’s on his birthday dinner list (the unlaminated version).

mmmmmm Muffins from the Muffinman

I was lucky enough to score four free muffins from the MuffinMan at China Square through a recommendation from Pat Law.

Maurice, the owner, was so friendly and helpful and I ended up walking away with one of every muffin they had in the store – they all sounded delicious and were so so so beautifully presented. The selection they have will cater to just about everyone – from triple chocolate to orange blueberry to rum raisin.

Made fresh daily on premise, their fruit muffins are 99% fresh fruit, so that must mean it’s 99% goodness … ? Seriously, it makes a difference you can really taste.  The flavours are rich but not too sweet, and they are so light, a whole muffin isn’t an imposition on your tummy.

My favourite was definitely the orange blueberry, but the mint chocolate with its gooey centre came a close second.

What a great way to give yourself a little treat !

Check them out at China Square Central – they’re inside the main shopping mall area. 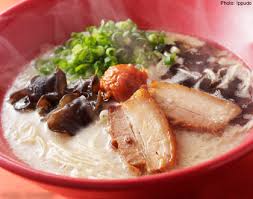 Now I haven’t actually had that much, but I’ve been wanting to go visit Ippudo Singapore (the story here) since I read about it in some random magazine, and finally today got to have an early dinner with D and N. No bookings, small restaurant, all guests at your party need to be present before you can be seated – all recipe for disaster if I’m hungry.

Thankfully we got there bang on 6pm and think we just missed the crowd – by 7 when we left the queue was already 40 people long. Insane. You would think.

Ippudo isn’t exactly the place where you are going to have a relaxed and chilled meal. But then again, you don’t go there for that, you go there for the phenomenal ramen. And gyoza, because we’re greedy.

The stock is burstingly rich with flavour, the noodles are “to order”, soft, medium or hard (we ordered medium which started off a wee bit too hard but by the middle of the dish it was perfect) and it’s now a few hours later and I don’t have that MSG haze or a screaming thirst.

Just fan-bloody-tastic ramen. If you can be bothered getting there super early – otherwise I’d expect to wait maybe 45-60 minutes, or perhaps a late lunch on the weekend ?

Staff are friendly and attentive and efficient – what more could you ask for ?

I also want to explore a bit more of the 4th floor of the Mandarin Gallery – there looked to be some nice cosy little places to have tea, and there’s a Jones the Grocer there, so I don’t have to go all the way to Dempsey now.

Heard a lot about this place. And it’s the place that made me fail at my self imposed ban on eating non-ethically reared ducks for foie gras…

We ordered seven entrees between the five of us, and we devoured everything ! The lobster bisque was a bit disappointing, but the foie gras, which is meant to be chef Jusman So’s signature dish, and his mushroom soup served with scrambled eggs with truffle, won me over completely.

The foie gras to start with was the sort that you don’t often get in Singapore, where it seems to appear on every menu. The flavour was incredibly intense, and made moreso by the chef searing it till crispy on the outside, but still soft and tender on the inside. BRILLIANT. It came served on a fig, pecan and honey tart topped with poached pear puree and chocolate gastrique but to be honest, I didn’t even notice that there was anything else on the plate.

The cappuccino of wild mushrooms with truffle infused scrambled eggs, asparagus and morel cream was another intensely flavoured soup – I would rank it up there with Le Bistrot’s cream of mushroom soup which I LOVE – and served with just cooked egg in an eggshell, with specks of truffle. How would you go wrong ??

I needed a lighter main course, so had the fillet of cod, which came topped with prawn and cognac butter on salt cod brandade, caramelized lemon confit and bouillabaisse jus. The bouillabaisse was a wonderful accompaniment to the delicate flavour of the cod.

The main course winner on the table was the 300 Days Grain Fed Black Angus Ribeye – served for two and just amazing. Nothing more to be said.

The beef cheek came rather unappetisingly served as a brick that with the sauce, resembled a square sticky date pudding. The flavour was lovely and the texture was melt-in-your-mouth tender, but there was quite a lot of a very rich dish. The duck confit was also disappointing – it wasn’t bad, just wasn’t good, and for the standard of the rest of the dishes, really quite unremarkable.

No crab at no signboard

My sister, brother in-law and my niece were in town for a short visit and stayed at the Fullerton, so we thought we’d take a stroll across the river to No Signboard for some local cuisine.

Amongst the usual hustle and bustle of that crazily busy restaurant, we ordered our food – sans crab for the first time ever, due to a boycott P made on crabs (it’s too fiddly) and also with my two year old niece, crab would have turned into a food fight.  So what DO you order when crab isn’t the main event ?

The sweet and sour pork was served luke warm and slightly anemic looking, the steamed fish tasted a tad “muddy”, but the rest of the meal was spot on.  Chicken with dried chilli was tender and fiery hot, seafood crispy noodles and fried rice were excellent and we were all garlic-ed out by the snow pea sprouts with garlic.

All a bit hit and miss, a little disappointing when everything should have been good.  But for $50 a head (and with beer served in mugs so cold you get beer icicles forming in your mug) and the superb location, you can’t really go wrong, can you ?